Enjoy the widest selection of tequila in San Diego 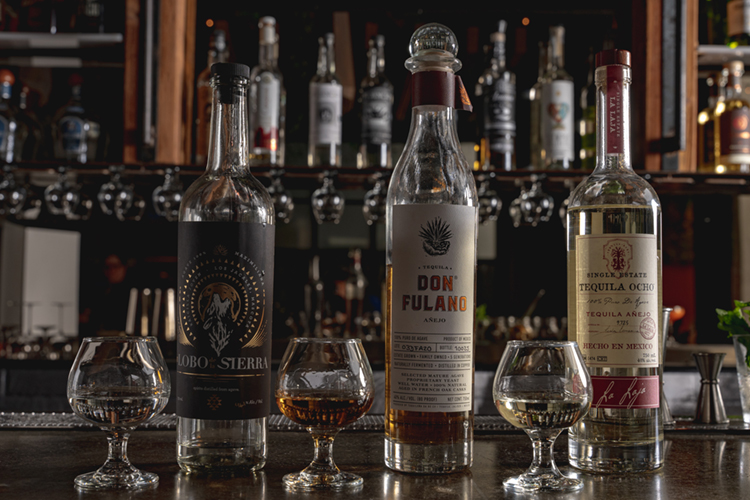 With well over 100 tequilas in our collection to enjoy, ranging from small batch distillers to more recognizable tequila names, we believe our selections represent one of the finest in all of San Diego. All the tequilas served at La Puerta are 100% blue agave and most are from Jalisco, Mexico – the birthplace of tequila. Our tequilas are here for one sole purpose: your enjoyment. In our tequila menus, we have provided a reference of tasting notes that comprised characteristics of “the nose” or smell of the tequila, and the flavor profile.

The geographic location of the agave harvest is routinely mentioned as a main difference maker in tequila taste. Highland agave grows in a moist climate producing more juice-filled agave plants. Lowland agave plants grow in drier soils with limited water and are smaller in size. Highlands Tequila tasting notes often mention fruit, pepper, and citrus. Lowland Tequila characteristics reference mineral, herbaceous, and earthy flavors from the volcanic soil in which the agave was harvested. Though tasting tequila is highly subjective we have attempted to list our tequilas in a progressive order from easiest drinking to more dynamic tasting characteristics.

We welcome you to see if you can find the similarities in the notes provided or offer your own in dialogue with our staff. Either way, you will certainly find enjoyment and pleasure in tasting the differences in tequila.

FROM THE GROUND TO THE GLASS

The process of how tequila is made starts with blue agave plants, also known as maguey (pronounced muh-GAY), that have been cultivated on plantations for eight to ten years. When the plant reaches sexual maturity it starts to grow a flower stalk. An El Jimador, the Spanish name given to an agave worker, cuts off the stalk just as it is starting to grow. This redirects the plant growth into the central stalk, swelling it into a large bulbous shape that contains a sweet juicy pulp. When the swelling is completed, the plant is cut from the ground and the longsword-shaped leaves are removed leaving the piña. The piña or “pineapple” is so-called because the cross-thatched denuded bulb resembles a giant green and white pineapple that can weigh anywhere from 25 to 100 pounds.

First, at the distillery, the piñas are cut into quarters. For Tequila they are next slowly baked in steam ovens or autoclaves until all of the starch has been converted to sugars. They are then crushed and shredded to extract the sweet juice, called aguamiel or honey water. Next, the fermentation stage determines whether the final product will be 100 percent agave or
mixed, “mixto”.

Mexican law requires that all tequila be distilled at least twice. The first distillation creates a cloudy liquid called “ordinario.” A second distillation separates the “heads” and “tails” of the milky liquid leaving only silver tequila. The highest-quality Tequila is made from fermenting and then distilling only agave juice mixed with some water. These Tequilas are 100% de Agave – only water and agave. Mixto tequilas only have 51% agave and 49% of other additives such as sugar cane. By Mexican law, the agave spirit called Tequila can be made only from one particular type of agave, the blue agave (Agave Tequiliana Weber). Furthermore, all licensed and recognized tequilas must be produced and bottled only in specifically designated geographic areas, primarily the state of Jalisco in west-central Mexico. If a Tequila is one hundred percent agave it will always say so on the bottle label, 100% de Agave. If it does not say 100% de Agave on the bottle it is a mixto.

Beyond the two basic designations of Tequila, agave and mixto, there are four basic age classifications for 100% agave tequilas: Blanco, Reposado, Añejo, and Extra Añejo.

Blanco Tequila is unaged and with flavors that represent the truest characteristics of the agave. Reposado Tequila, translated meaning rested, is aged anywhere from two months to one year in oak, often giving hints of vanilla to the agave flavors. Anejo Tequila is aged in wood from one to three years and Extra Anejo Tequilas are aged a minimum of three years. These longer aging periods in oak tend to bring forth a smooth spirit with strong vanilla and spice flavors.